A two-day meeting (18 and 19 November) took place in Sonderborg, in Southern Denmark, on the theme “The German-Danish border reg 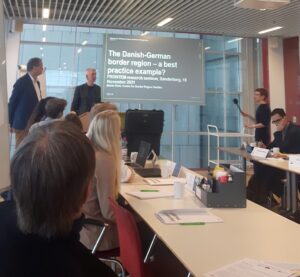 ion: a best practice example for other European border regions?”.

CCBS Director, Anthony Soares, participated in the research seminar and focus group that formed part of this event, and which is one of the activities under the Jean Monnet, FRONTEM Network. Funded by the European Union’s ERASMUS+ programme, FRONTEM brings together a number of partners, including CCBS, both from Europe and Canada to develop international and multidisciplinary research linking European Studies and Border Studies.

The network seeks to facilitate a new reading of the role of the borders in European integration by considering that there is not only one model of perception and management of borders in and around the European Union, but that these also depend on the specificity of each border region. This was the focus of the event in Sonderborg, highlighting the realities of the German-Danish border region.