Search
Home > Journals > The Journal of Cross Border Studies in Ireland – No.10

The Journal of Cross Border Studies in Ireland – No.10

Conservation without Frontiers: historic buildings in Armagh and Monaghan in context
Primrose Wilson

Competition and Collaboration in the Anglo-Scottish Borderlands
Keith Shaw

Ireland, Northern Ireland and Britain in the EU: A Brussels Perspective
Tom Hanney

Britain and Europe: The Endgame – An Irish Perspective
(Reviewed by Martin McTaggart)

Northern Ireland and the European Union: The Dynamics of a Changing Relationship
(Reviewed by Anthony Soares)

How to Change the European Union
(Reviewed by Ruth Taillon)

Border Vigils: Keeping Migrants Out of the Rich World
(Reviewed by Ruth Taillon)

Towards a Wellbeing Framework: Findings from the Roundtable on Measuring Wellbeing in Northern Ireland
(Reviewed by Helen Johnston) 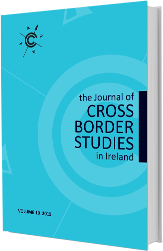