Search
Home > Journals > The Journal of Cross Border Studies in Ireland – No.1

The Journal of Cross Border Studies in Ireland – No.1

The Journal of Cross Border Studies in Ireland will be an annual publication. 5,000 copies of the first issue will be printed and distributed. The audience is a high level one: senior politicians, civil and public servants, local authority representatives and officials, business people, academics and journalists, as well as people working in the field of North/South co-operation.

In the future, the Centre is planning to hold an annual research conference, out of which the papers will be published in the Journal.

The research articles in this first edition are as follows:
Professor Francois Vigier, Professor Emeritus of Regional Planning at Harvard University (and a founding board member of the new International Centre for Local and Regional Development), John Driscoll, Director of the International Centre for Local and Regional Development, and Christa Lee-Chuvala , Research Associate with the Institute for International Urban Development in Boston, write about the lessons of the US experience in managing urban and regional growth through ‘ad hoc regionalism’. This builds on the existing powers of local government to achieve efficiencies in large-scale spatial planning. The authors believe that US experience could be helpful to policy makers in using existing structures to try to reconcile the visions outlined by the Regional Development Strategy (NI) and the National Spatial Strategy (RoI) in an island context.

Professor Liam O’Dowd, Professor of Sociology at Queen’s University Belfast, writes about the problems of sustainability for cross-border co-operation projects as the generous EU and other overseas funding of recent years starts to run out. He finds that those activities which can maintain partnerships across the state, business and community/voluntary sectors are most likely to survive, although much depends on the political environment, personal networking and the capacity to institutionalise cross-border co-operation effectively.

Andy Pollak, Director of the Centre for Cross Border Studies, looks at the extraordinary growth of cross-border co-operation in education, youth work and training over the past decade. He outlines the lessons of ‘good practice’ projects like Wider Horizons and Civic-Link, and uses evaluations of these projects to emphasise that to have any real impact on young people’s attitudes this kind of work must be long-term and have sustainable funding. He queries whether in the current political and financial climate such long-term sustainable support is feasible.

Patricia Clarke, Research Manager of the Centre for Cross Border Studies, and Jim Jamison, formerly Director of the Health and Social Care Research Unit at Queen’s University Belfast, examine the progress of cross-border health co-operation over the past decade. They note that such co-operation is not yet embedded in plans for reforming the health systems, North and South, and that the cross-border movement of patients for treatment remains very small. They find that senior health officials have become more realistic about the practical difficulties in the way of greater co-operation, particularly in the area of patient mobility.

Eoin Magennis, InterTradeIreland, Joseph Shiels, the Centre’s ICT Leader and Patricia Clarke use the Centre’s new Border Ireland online cross-border information system to reveal a picture of the extent of cross-border activity and funding over the past two decades, and to begin to ask questions about the overall impact of such co-operation. They find 2,790 funded activities in the period 1982-2005 with total spending from a range of governmental and non-governmental sources of €762 million (£533 million). Other features they note are that nearly 40% of activities funded as ‘cross-border’ have not had any cross-border element at all, and that the number of funded cross-border activities peaked in 1997 (although when measured by total funding allocated, there were twin peaks in 1996 and 2004). 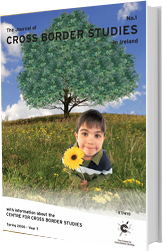